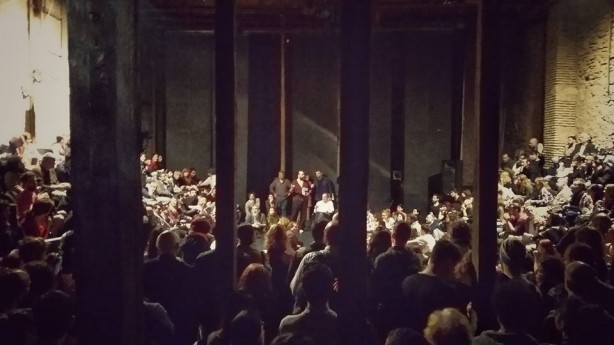 After a very brave and rare meeting with 500 artists, a short statement announcing Jan Fabre’s resignation, and a letter from the Ministry for Culture, claiming that it was the fault of the artists, the novel Jan Fabre still has many chapters needed to be written. Some of them might, however, still provide a sense of a happy ending.

Athens & Epidaurus is considered a major event on the Greek scene and this explains – but should not tolerate – the violent reactions from the Greek artistic community. One must understand – and the ministry in particular – that this reactions are not only a response to a sense of belonging that has nurtured generations of artists and audience members, but the strengthening of a sense of belonging, citizenship and cultural identity of a country, and therefore being a political matter because embodied on an approach to society that does not take acting in public as mere metaphorical demonstrations.

This is what Jan Fabre and his team did not understood: theatre in Greece is an act of politics, and therefore everything needs to be taken into consideration. Money is not a tool and words are not concepts, they are actions. And even more so when sometimes it’s all it is left.

In that sense, the ministry has now the opportunity to redeem itself and propose a strategy that will enhance the willingness of Greek artists to actively participate on the development of a festival, by acknowledging their social and cultural consequences.

The first thing the ministry has to clarify is if the resignation of Jan Fabre’s means the backdrop of his project. And if that is the case, answer clearly what will happen with the contracts and the obligations already settled. The fact that Troubleyn decided to accept the curatorial job for 20.000€ should not be a matter of pride but a constructive discussion on how much value does the ministry puts on a curatorial strategy. It cannot be used as an argument as if it was some sort of offer, or worst, a favor, that Fabre was doing to the Greek artistic scene and audiences. How big will the financial losses now that Fabre’s not there? The answer to this question is very important so that no ones dare to do an ad hominem example of someone who clearly was taking too much advantages of such a scheme.

As a second measure – if the Ministry for Culture truly wishes to have the Greek artists as partners – Mr. Baltas needs to use the Athens & Epidaurus as an example, paradoxically, to all what his policies have not been so far, nor have been the greek cultural policies for the past 15 years, to say the least. In a system that needs a profound restructuring, the festival can set an example not only for a very much-needed cultural policy but also on what needs to be done in an international context filled with festivals and networks.

Festivals and networks were, and are in some extent, the reason why we can nowadays share so many common references. But they have become, in general, a way of spreading methods, discourses and labels that uniformed the access to the richness and diversity of contemporary discourse. We’ve fallen into the trap of immediacy, novelty, mediatisation and sensationalism that, in many ways, led to the idea that Jan Fabre’s visibility was the only way to regain the status of a festival that the Ministry for Culture and Sports itself killed off when forgot that a curatorial signature is independent from the tastes and dislikes of the sitting at the desk of Bouboulinas Str. The same “carte blanche” that Fabre required to work is the same the Ministry fallen short of backing up under the direction of Giourgos Loukos.

In this sense, in order to still save this year’s edition, the Ministry should appoint an independent negotiator whose mission should be to speak with the other players in the terrain and, together, come up with a programming that would present a balance between Greek and international projects. For that, it should go back to the Greek proposals that still seat at the table for approval and clearly identify 1) those who have an international appeal and look for partners, 2) those who can better operate in a national scale and 3) propose an intervention throughout the year, so that the strict budget, that it is claimed to exist, can become not of one expenses but on of investments. It should also look around the international festivals happening at the same time and propose the sharing of costs and co-presentations, in order to avoid over expenses. With this balanced strategy, and probably delaying the calendar of this year’s edition, one could still expect a fruitful 2016 program where the role of the festival would be the center of all discussions.

After that, Mr. Aristides Baltas should also have the courage to open an international call for the job, stating clearly what the role of the festival, its contribution to the local and international scene and the terms and conditions that need to apply. In my view, the singularity of the long tradition of the Athens & Epidaurus Festival should rely on its capacity of becoming exemplary and put upfront its role on the development of Greece’s performing arts scene. Some examples of the work that needs to be done:

In short, the Athens & Epidaurus Festival can provide the laboratory that Europe is very much in need when funds are shortening, artists are no longer local and tourism is changing and challenging the way audiences behave (and audience studies and analysis are being produced). There is still time to be part of the change, Mr. Baltas.